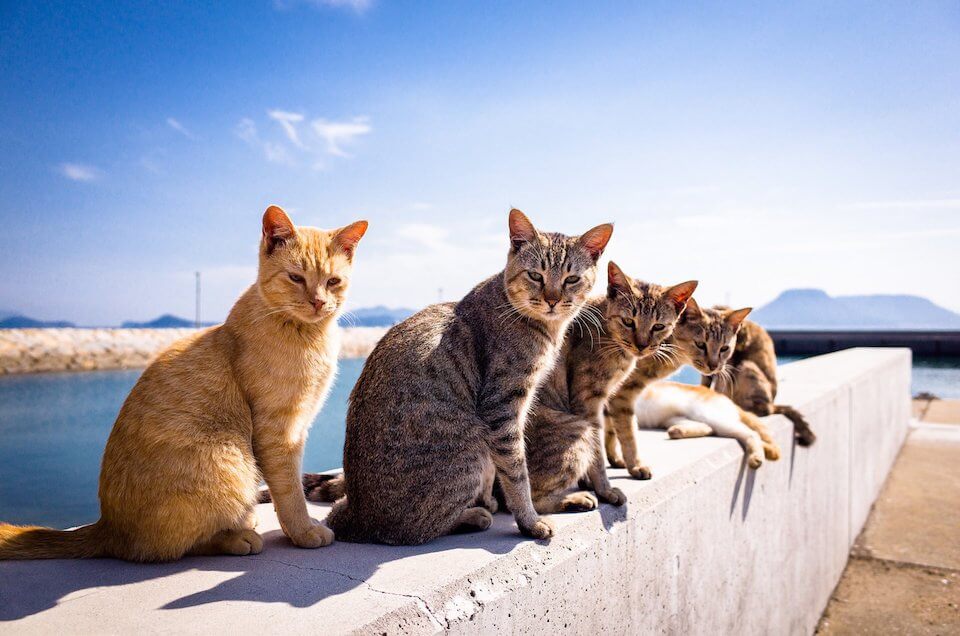 If you love cats you might find it ideal to be in the company of a cat. What about the company of more than 100 cats? Can you imagine that there is an island on Earth with more cat residents than humans? An island that is full of cats. This island full of cats is located in Japan. Aoshima, also known as Cat Island, is an island in Ehime Prefecture, Japan.  The large number of feline residents made the place known around the world.

The island has become an island of cats due to natural reproduction and human depopulation. Aoshina was just a fishing village in 1945, when it had a population of approximately 900. The island was estimated to be home to 50 residents in 2013.  After that, in 2018, the population had decreased to 13 people. Most of the people were having an average age of over 75.  However, looks like this year only 6 residents remained on the island. The island is very often visited by people people who want to meet the cats and give them food.

Some of the cats who live on the island are very friendly, others are semi-feral. Most of the cats are used to human visitors. Thanks to the recent boom in publicity, it’s not unusual to find there a lot of tourists. The tourists are feeding the cats, cuddling them or attempting to befriend them. These beautiful felines are happy to play and get all the attention. In return, they let them take some nice photos.

Do you wonder how did the cats get there? The story goes that a long time ago fishermen were facing a plague of mice on their boats. This was the reason why they brought some cats along on their trips.

There is no car or even a bike in Aoshima. There are also many abandoned houses where cats can live peacefully. Therefore, the island is a quite safe place for cats.

If you would like to visit the island, you need to get off at JR Iyonagahama station and walk to Nagahama port. From the porte, you will have to take a boat to Aoshima. However, there are two departures per day.

If you plan to visit Aoshima, here are a few rules for the visitors:

1. Feed the cats only at a designated area near the “community centre”. Do not give food around the dock, where people get on and off the ship.

2. Do not hang around the dock, where people get on and off the ship. once you get off the ship, just keep moving away from the dock area

3. Do not enter the private area. In other words don’t enter local people’s houses

4.Take the garbage back

5. Do not feed the cats too much. For example, If brought too much food for cats, you can leave it in the cat food containers in front of the community center and at the waiting room for the ship.

6. There is a donation box in the waiting room for the ship.

On Aoshima Island, cats rule, not humans. In conclusion, if you decide to visit the island don’t forget to take some cat food with you and get ready to cuddle a lot of furry friends!