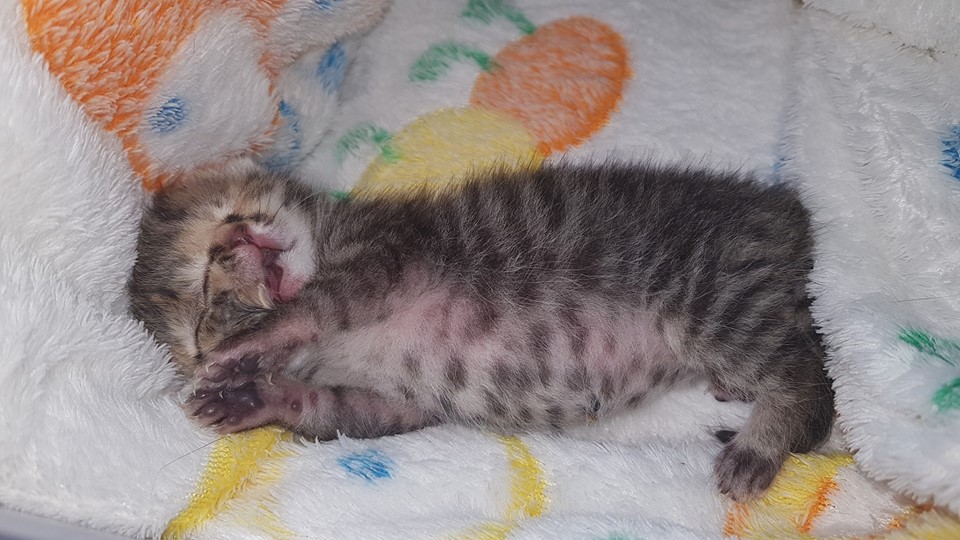 Diprosopus, also known as craniofacial duplication, is an extremely rare congenital disorder whereby parts (accessories) or all of the face are duplicated on the head. Although classically considered conjoined twinning, this anomaly is not normally due to the fusion or incomplete separation of two embryos. It is the result of abnormal activity by the protein SSH. A tiny tabby kitty was recently born with this condition in South Africa has already melted hearts around the world. The kitten with two faces, named Bettie Bee was born with two noses, two mouths and three eyes. Her mum had given birth to a litter of three kittens but Bettie Bee is the only one suffering from the condition.

Her condition meant it was difficult for her to nurse and her owners were worried she would starve. Even though vets advised she should be put down as her condition would worsen with age, her owner decided to fight for her life. Bettie Bee is now with a cat rescuer to be looked and fed with a tube. The rescuer said the kitty is doing well. She is already two weeks old and she opened her eyes!

The kitten has already her Facebook page and many people follow her evolution hoping she will be healthy.

Cats with the condition are known as ‘Janus cats’, after the Roman god. Frank and Louie, was the well-known kitty with two faces that lived in Massachusetts and was born in September 1999. He was initially not expected to live more than a few days, as animals with this condition usually die within that time frame but he lived for 15 happy years! In 2012, the Guinness Book of World Records recognized Frank and Louie as the world’s oldest living janus cat.