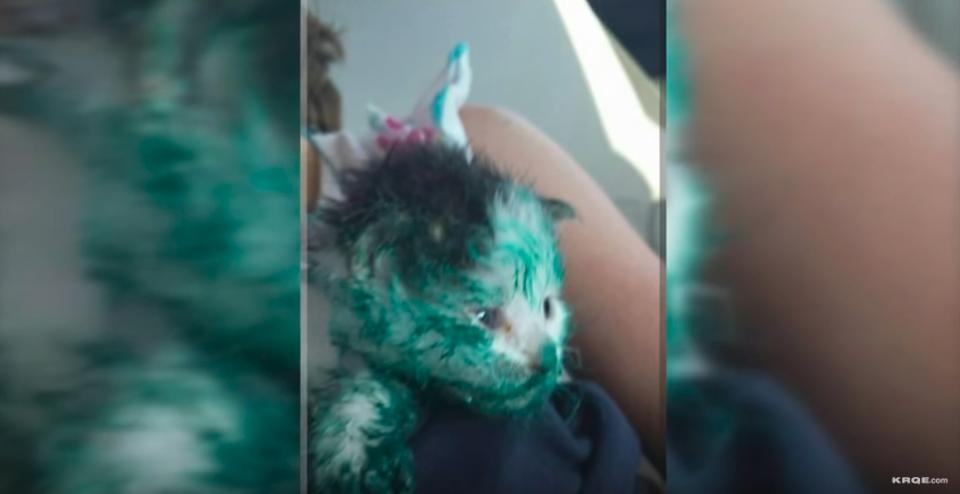 A kitten was found in a dumpster by a man who was riding by on his bicycle, in ALBUQUERQUE, NM. The man heard a kitten mewing really loudly so he looked in and he found this kitten near a few others who unfortunately weren’t alive. The kitten was paint-covered. “Her name is Teal and she’s now paint-free but it took about a week,” said Hall-Devoti, the kitten’s foster mom. Wendy Hall-Devoti said she was at Blake’s Lottaburger near Washington and Menaul when she met the man who found the kitten. He was frantically rode up on a bike.

“He’s wearing this really nice blue shirt and a tie and it’s all covered in blue paint,” said Hall. The man was searching for someone to help the kitten, She took the kitten, she rushed to help her but she didn’t get any information for the man who saved her. Now she would like to find the man to let him know Teal is going to be just fine.

“Apparently when he was riding by on his bicycle, he heard a kitten mewing really loudly from a dumpster and he jumped in and he found this kitten and all the other kittens were dead,” said Hall-Devoti. “He picked her up and got paint all over his clothes and was trying to find somebody to help.”

“We just started wondering what if he was going to a job interview and he didn’t get the job because he saved this kitten,” said Hall-Devoti. “Or what if his boss didn’t believe this big tough guy jumped in to save a kitten and he just came to work all covered in paint and he just lost his job.”

“Now we don’t know what happened to him and it was such a good thing to do,” said Hall-Devoti. “You know when you’re on your way somewhere and you stop to save a kitten in a dumpster.” she said.