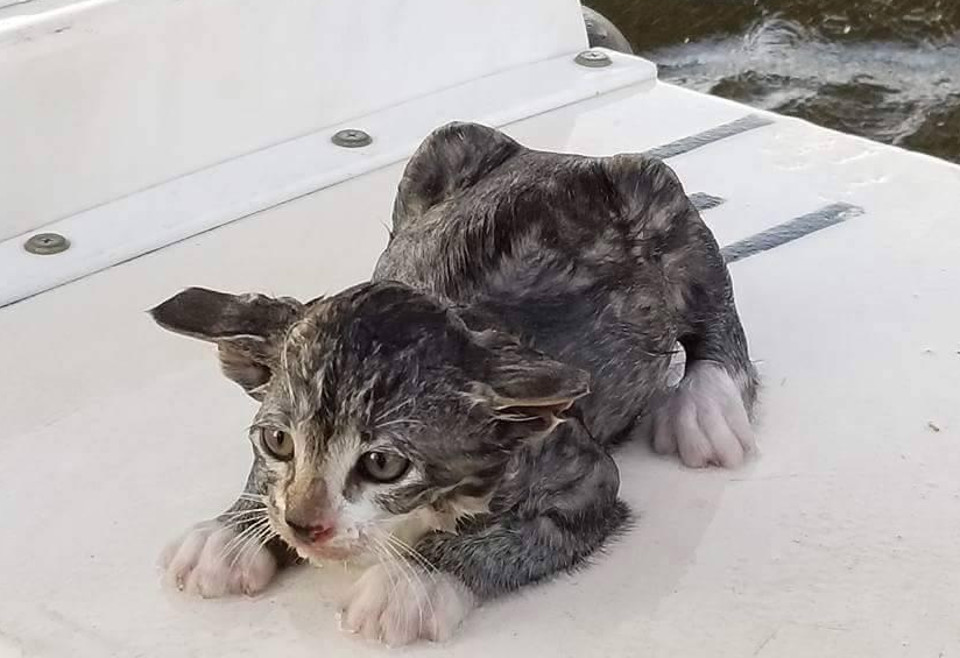 Reece Newman and his two colleagues, Ben Presgrave and Billy Cox, of North Carolina Department of Transportation were in a boat under the Old Manns Harbor Bridge about a mile from shore in 15 feet deep water.

When they were getting ready to do their bridge inspection they heard a vehicle coming over the bridge. One of the inspectors saw something fly off the bridge that was thrown from the car. Initially they thought someone thrown some trash but when they spotted something moving on the surface of the water, they realized that wasn’t trash!

They went closer and they found a tiny kitten just barely clinging to life! He could barely keep his head above the water and he had no chance without them.

They immediately jumped in the boat and headed to the kitten. They took the kitten, fetched a towel to dry him off and headed for land to take him to the vet. The kitten was fine, he only suffered some scratches on his nose from trying to climb the concrete bridge pilings. No broken bones or water in the lungs.

“The kitten that was thrown off the Old Manns Harbor Bridge yesterday and rescued by three of our Underwater Inspectors, Reece Newman, Ben Presgrave and Billy Cox, has been adopted by Reece and his family. After a quick checkup at the vet, Bridger Catfish Newman is healthy and now has a new, loving home. We’re proud of our employees who go the extra mile!” North Carolina Department of Transportation wrote on North Carolina Department of Transportation.

The kitten was named Bridger Catfish Newman. In the video below you can watch him playing with his dad’s shoe. :)

Today Bridger Catfish Newman is a big, beautiful and happy kitty. You can follow him on his Facebook page.