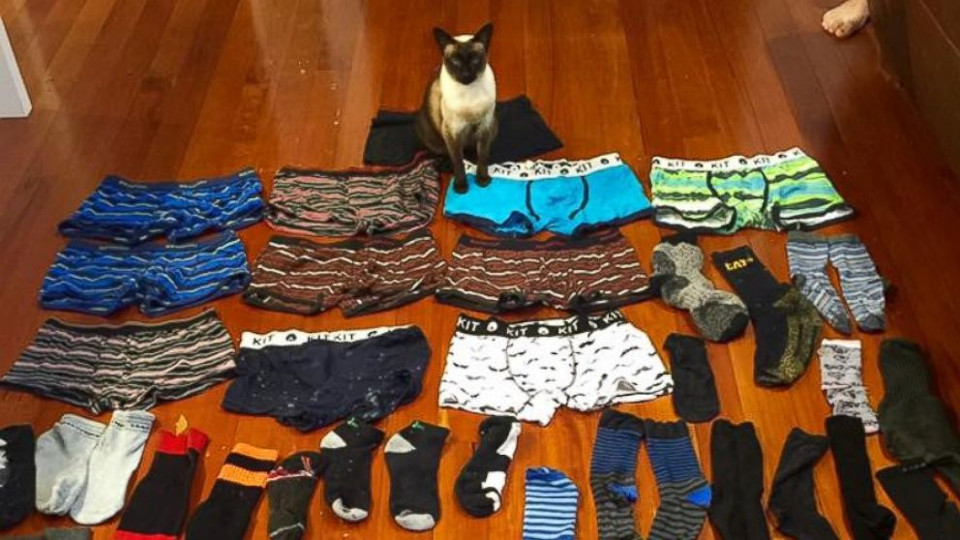 Brigit is a 6 years old Tonkinese cat that lives in Hamilton, New Zealand. Brigit has become a social media sensation because of her obsession with men’s underwear that she is stealing from the neighborhood and she is taking home to her owner Sarah Nathan.

In two months Brigit took home a variety of stolen boxers and socks, she has stolen 11 pairs of boxers and more than 50 pairs of socks.

“It’s all men’s,” “It’s really, really weird. She’s got really specific taste.” “It’s an absolute obsession,” she continued. “A night does not go by without her bringing things home. I got up this morning and there were another four socks in the house.” Sarah told.

“Every morning we wake up to more. I’ve put notes in every letterbox in the street. Please share if you know someone who lives in the George St. area.” Sarah wrote on Facebook. “In our last house she’d bring home a bit of everything,” Sarah continued. “Men’s undies, women’s undies, togs, she even brought home a hockey shin pad and a jumper.”

In their previous house Brigit did the same! There she had stolen from the neighbors kid’s clothes, swimwear, sweaters, sports equipment, ladies underwear, and toys.