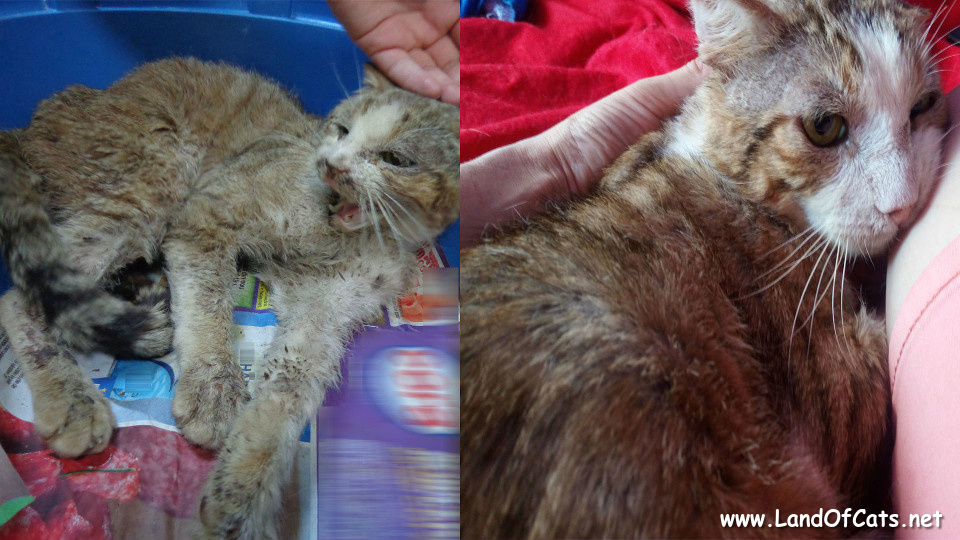 Richie is a 10 years old cat who lived all his life as a feral cat. People were feeding him but nobody could touch him.

One day Richie started to get thinner. The humans who were feeding him tried to catch him and take him at the vet but it was impossible. For a while he stopped coming for food and he was nowhere to be found.

“He lived a happy life as a feral cat. He was fluffy and so clean. He had a few humans who were feeding him daily.” “He was coming also under my window waiting. I could only talk with him but I never touched him.” Richie’s rescuer told Land of Cats.

“When he stopped coming I knew something had happened to him”. “One day I noticed a thin and dirty cat waiting near my window. I rushed to see what is with the poor kitty.” The woman was shocked to see the poor cat was Richie…

“He walked up to me, he let me take him in my arms.” said Richie’s rescuer. The woman rushed with him at the vet. He was totally dehydrated, full of fleas and dirty with oil. His health condition wasn’t good, the vet didn’t know if he would make it. He needed fluid therapy and a lot of medicines.

Richie spent a few weeks at the vet. With a lot of love and care he made it, he was over the critical period. Unfortunately Richie has a tumor in his mouth so he can’t live as a feral cat any more.

After a few weeks spent at a vet Richie found a human who decided to take him home and offer him a forever home for the rest of his days.

“He needed a few baths to get rid of the oil from his fur. We don’t know how he ended up with so much oil on him.” “He let me wash him, it was like he felt it was good for him.” Richie’s new human told Land of Cats.

“He doesn’t totally trust me yet but he is happy! I can cuddle him and he feels safe. He will have now so much love and no more worries. We are happy we could help him and offer him a better life now that he is old.” said Richie’s human.

Watch Richie’s story in the video below: