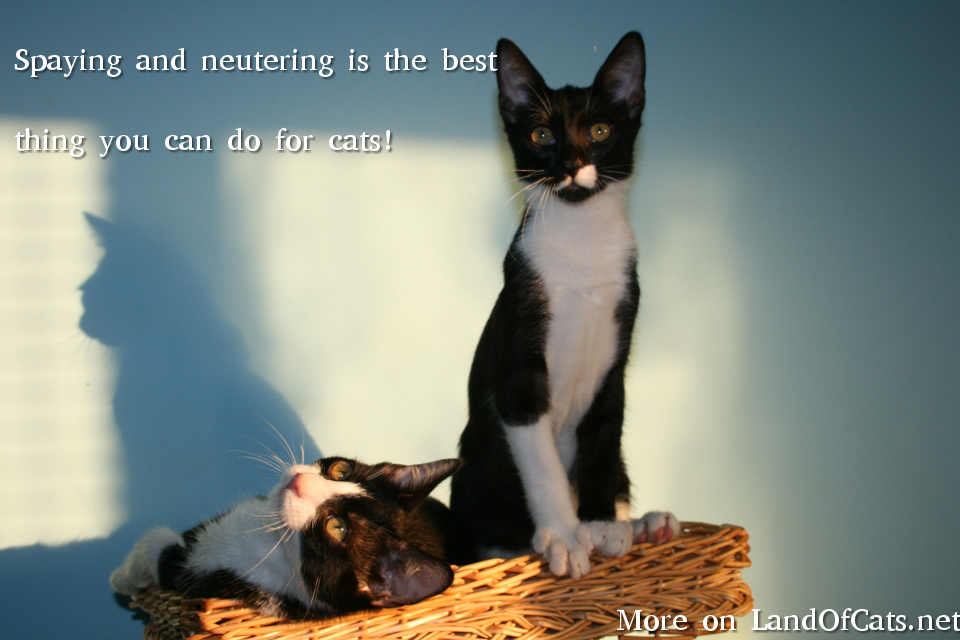 The decision to spay or neuter your cat will be one of the biggest decisions you make regarding your cat’s health and welfare as well as the welfare of other cats. Pet overpopulation is a tragic problem. Each year, hundreds of cats in shelters don’t find families to adopt them.

In United States between 6 and 8 million dogs and cats (including puppies and kittens) are brought to animal shelters annually. Some of these animals are strays; others are surrendered by their owners. It happens the same in other countries also. One unspayed female cat and her offspring can produce 420,000 cats in just 7 years! Spaying and neutering is the only way to reduce or eliminate that.

Don’t give your cat birth control pills! They can have serious unwanted side effects such as the development of diabetes mellitus and of many other diseases!

Myths and facts about spaying and neutering:

Myth 1: Female cats should have at least one litter before having them spayed.
Fact: There is no medical evidence to justify allowing a cat to have a litter before spaying. In fact, spaying female cats eliminates the possibility of developing uterine or ovarian cancer and greatly reduces the threat of mammary cancer.

Myth 3: Behavior is adversely affected by sterilization.
Fact: After spaying, cat behavior will generally remain the same. Your cat might act differently for a few days while recovering from the operation, but her personality will remain unchanged. The only changes in cat behavior after spaying or neutering are positive changes. Male cats reduce or stop territorial spraying, depending on their age at neutering. Neutered cats fight less, and they tend to stay home more after neutering because they no longer wander in search of a mate.

Myth 4: Spaying and neutering is painful for the cat.
Fact: Spay-neuter surgeries are the most routine surgeries performed in the veterinary world, and also very safe. They are typically very quick, too. Most cats are awake and alert, walking and eating within a few hours of the surgery. The cat is under general anesthesia the entire time, so it will not feel any pain. There may be mild discomfort after the surgery, but the cats return to normal activity within 24 to 72 hours.

Myth 5: Neutering a male will strip him of his “masculinity”.
Fact: Your cat doesn’t have an emotional attachment to his sexuality, and won’t miss anything once he’s neutered. Because neutered cats are less aggressive, roam less frequently, and rarely mark with urine, you’ll have a happier and better-smelling cat.

Myth 6: Spay-neuter surgeries are expensive.
Fact: The cost of sterilization varies greatly from one private veterinarian to another. If you can’t afford a sterilization you can search for a program that offers free sterilizations. Sterilizing a cat will me much cheaper than the money you would have to spend if they get ill when they get older because not being spayed or neutered. So spaying/neutering can lower vet bills!


Myth 7: Children should be allowed to witness the miracle of birth.
Fact: Most cats have their litters at night in quiet, dark places far out of anyone’s sight.
If you want to teach your children responsibility, you can rescue from a shelter a few abandoned baby kittens and take care with them till you offer them to adoption.

Benefits of neutering male cats:
– Sexually dimorphic behaviors such as mounting, urine spraying and some forms of male aggression are reduced due to the decrease in hormone levels brought about by neutering.
– Castrated male cats live twice as long as intact males.
– Testicular cancer is prevented as the susceptible organs are removed.
– Neutering a male cat prevents injuries and disease.

Please SHARE to raise awareness: Spaying and neutering is the best thing you can do for cats!