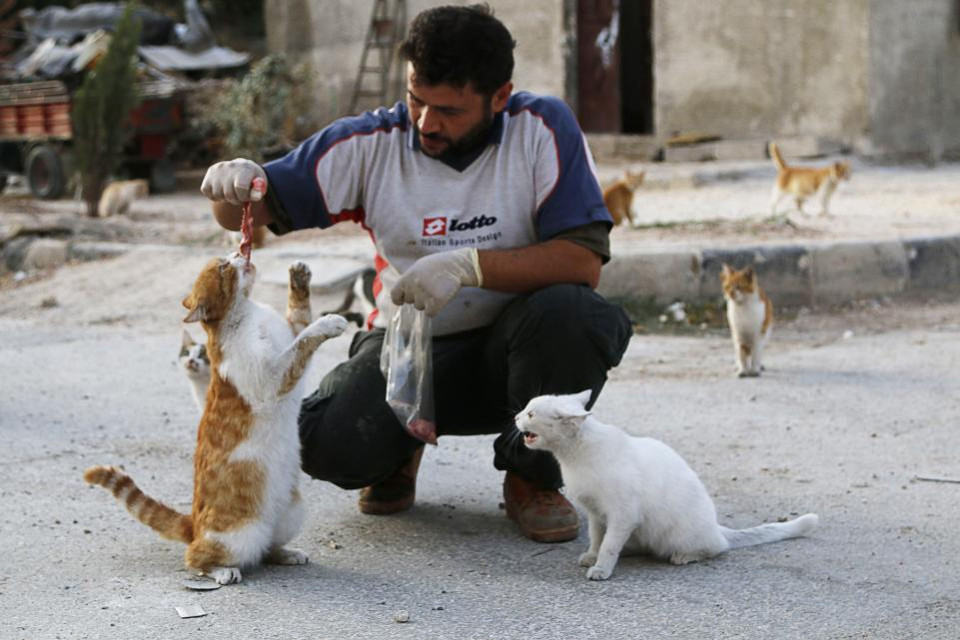 Mohammad Alaa Aljaleel, ambulance driver and paramedic began caring for animals in need in what was rebel-held eastern Aleppo in 2013.

“As people were fleeing and leaving their neighborhoods, the cats started to come to my area because I was already feeding some,” Aljaleel told NBC News in an interview.

When the Syrian civil war became more intense his responsibilities became much bigger. At the beginning he was feeding six or seven hungry felines and in a short time the number grew at more than 170.

By 2015, the man had built a cat sanctuary, named after his first cat “Ernesto’s House”. People started to know the brave man as “Cat Man of Aleppo” and he became a symbol of resilience and kindness amid war and devastation.

His purpose was feed and to keep his cats safe and healthy, as well as to create a playground for children with swings and other games.

“It was a really wonderful job,” he said. “All the schools and the children used to come and visit the sanctuary. They would see the huge amount of cats that were left behind by their owners.”

People started to drop more and more cats off before leaving the city in search of safety.

When he could, Aljaleel took also care of stray dogs, feeding them and giving them veterinary care.

Unfortunately, in November, bombs struck “Ernesto’s House,” reducing it to rubble. Most of the cats were killed and he was forced to flee the city with just a handful of the survivors. Their journey to reach the countryside outside Aleppo took them 15 days.

“Ernesto’s House” now has a new home in the countryside west of Aleppo. People all over the world follow his stories on Facebook and many people helped as they could. The house shelters now about 25 cats.

Aljaleel said that his decision of caring for the animals put a lot of pressure on his personal life and he ended up separating from his wife. His wife and his two children live now in Turkey. He tries to visit them as often as possible.

Aljaleel place is more than a cat sanctuary. “It seeks to erase the war from children’s minds,” he said. “Caring for the cats is a gateway to bringing good will to the country and build it around being more merciful.”