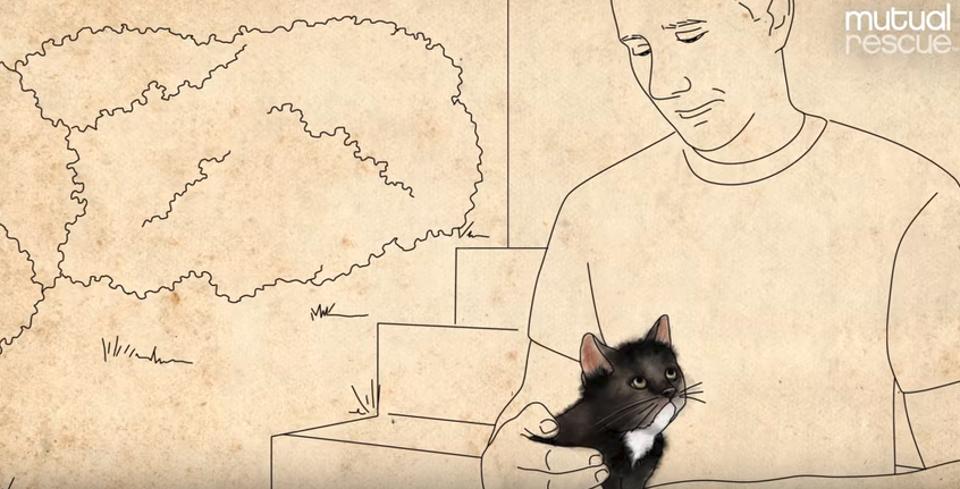 Josh Marino left the battlefield with severe injuries, with a broken soul and suffering from PTSD. He had to go through tough times as a soldier and he came home with an invisible wound that nobody could see.

One day, while he was sitting in the rain, the man decided to end his own life. The soldier was ready to give up. He was smoking his last cigarette when heard a tiny meow. A black and white kitty was walking out of the bushes and started to rub against his leg. Josh was so overwhelmed that he burst into tears.

“Maybe he knew that there was something I couldn’t quite handle” Josh said. That moment Josh stopped thinking about his problems and started to think at all that kitty’s problems. What could he do to help him? He decided to help the kitten and came back day after day to feed him. He even gave the cat a name “Scout.”

The kitten gave Josh something to look for every day. He didn’t see if anything was wrong with him, he didn’t see any imperfections.

One day Josh didn’t found Scout, the cat disappeared, and the man was devastated. Scout had an huge effect on Josh. Scout was his friend and he lost him.

Seven months later, another miracle happened. Josh and his girlfriend visited the local animal shelter, and while they were walking through crates of kittens, a little black an white paw struck him. Even though is hard to believe, the kitty was Scout!

Watch the video below to see the whole story. Don’t forget to share it with your friends.