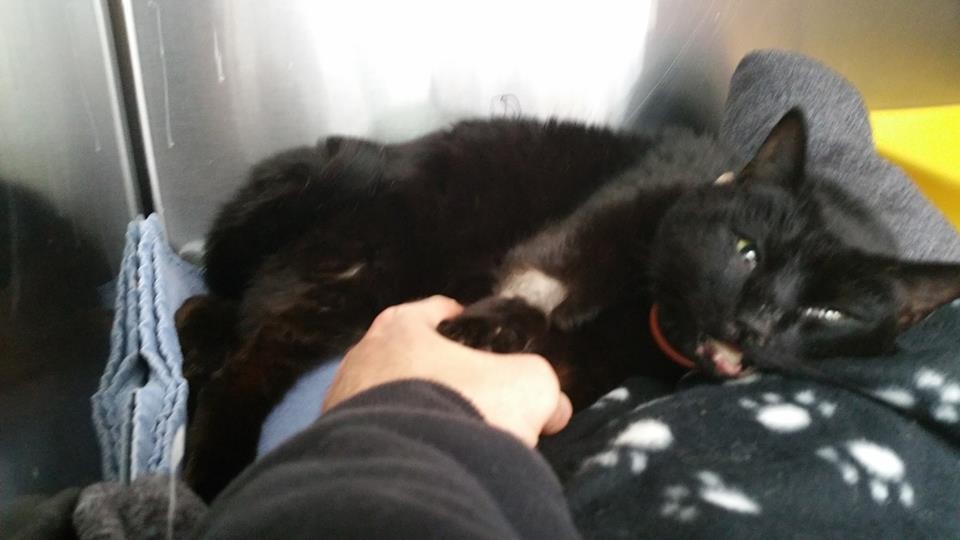 On a rainy morning, a poor black cat was laying facedown in a puddle, on the side of a road in British Columbia, Canada. The cat was hit by a car… The weather was very bad, with torrential rain. The cat was already considered dead but nobody stopped the cat to check him. The cat stayed there unable to move and in pain until a kind hearted man felt like the cat might be alive so he turned the car and went to check the cat.

“You almost hit a dead cat,” the passenger of Dennis McDonald, a 45-year-old truck driver, said to him.

“I look quickly at the passenger mirror and honestly, something hit me,” the cat’s rescuer said. “Tears started to well up in my eyes and I said, ‘I don’t believe that he’s dead. I’m turning around.’ I knew I couldn’t carry on with my day if I hadn’t gone back.”

By the time McDonald drove back around and stepped out of his truck to save the cat, another man had stopped to check on the poor cat in the rain. The motorist offered a box for the cat to be transported to the Burnaby SPCA where he received all the help that he needed.

“On the way out the door I told them, without hesitation, that if the owners don’t step up, I’d like to have first opportunity to adopt him,” McDonald said.

The cat, now named BB-8 after the “Star Wars” robot, had to have his jaw wired shut, in addition to suffering from a collapsed nose and fractures to his skull.

BB-8 had has an ear tattoo that led to contact information for his owner. The owner hadn’t seen the cat in a year. “She was in a place where she couldn’t do anything for him, so she surrendered him to the the vet and me. That broke my heart into a million little pieces.”

BB-8’s original owner gave him away to a neighbor, the neighbor lost him, and BB-8 was hit by car and then found by McDonald.

Today BB-8 is fine and happy, he will be completely recovered after this bad experience without any long-term health issues.

Dennis decided to take BB-8 in. He is the most affectionate and grateful,” McDonald said. “Truly humbled at this guy’s ability to move forward and put the pain behind him and focus on the love.”