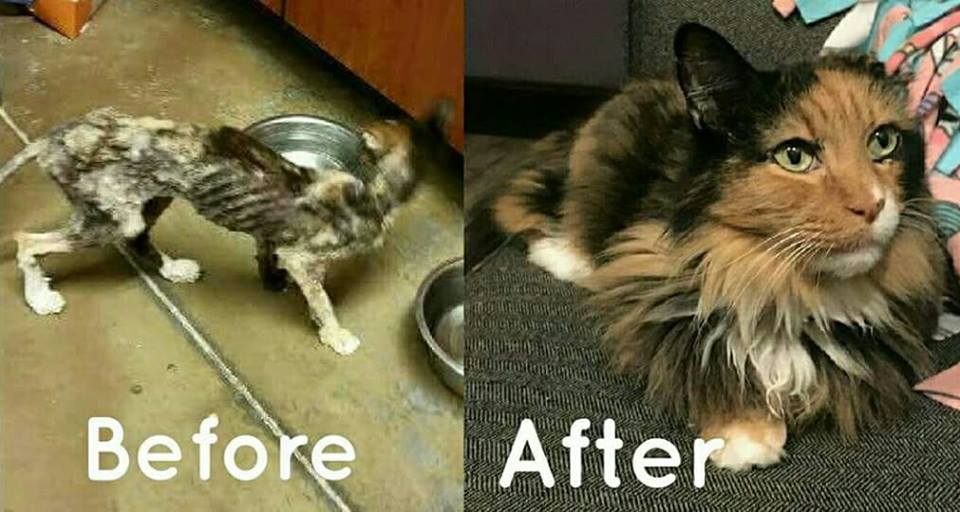 Raggedy Ann, a 14 years old kitty, was rescued from a horrific hoarding situation in Yuma, AZ. She was living in a double-wide mobile home with 40 other cats and 2 dogs. Poor kitty was skin and bones and she weighed a pitiful 3 pounds and 15 ounces when she was rescued by Saving One Life, a rescue group in Chandler, Arizona.

Saving One Life saw a photo with the poor cat on social media and they knew had to help. They decided to take her and try to nurse her back to health.

“Saving One Life stepped in to give this sweet girl a chance to find happiness. She has a long road ahead to recovery, but we are willing to fight as long as she has.” her rescuers wrote on Facebook.

In just five days in foster care, the old kitty has gained 5 ounce. It didn’t take her long and she began to purr when getting pet. She received around the clock care and learned what love truly is.

For the first two weeks she received subq fluids to ensure she was staying hydrated. With so much love and care Ann started to feel better, to put on weight and regain strength in her legs.

“Someone is slowly relaxing with snuggle time. She isn’t flinching as much when her foster mom gives her kisses on her head now. Still not a fan, but warming up slowly.” Raggedy Ann’s rescuers wrote on Facebook.

She soon started to socialize with the other foster cats, to climb the cat trees and to play with toys.

In just four months, Ann has tripled her weight and she looks amazing!

It didn’t last long and Ann found her forever loving family! “Today is an amazing day! Today our prayers have been answered. Ms. Raggedy Ann found her forever home. Her new mom drove over an hour and a half to meet her and chose to adopt without even getting to touch her.” her rescuers wrote on Facebook the day she was adopted!