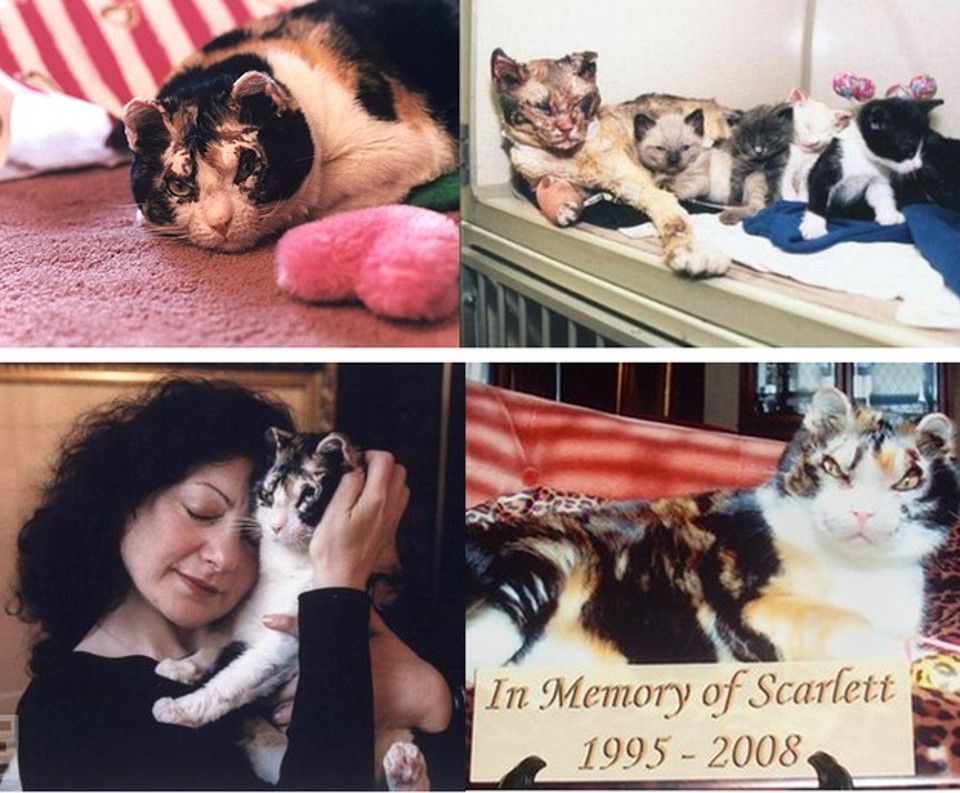 This is a story about a cat mom who made a huge sacrifice to save her kittens!

Scarlett’s road to fame began on march 1996. She was a stray cat mom from Brooklyn, New York. She was in an abandoned garage with her five kittens when a fire started from undetermined causes. The New York City Fire Department responded to a call about the fire and quickly extinguished it.

When the fire was under control, one of the firefighters, David Giannelli, noticed a few very small kittens near the garage. Then he saw Scarlett carrying her kittens away from the garage one by one. Scarlett went through fire to save her little babies!

Scarlett herself had been severely burned in the process of pulling her kittens from the fire. Her eyes were blistered shut, her ears and paws burned, and her coat highly singed. The majority of her facial hair had been burnt away.

After saving the kittens touched each of her kittens with her nose checking if they were all there and alive, as the blisters on her eyes kept her from being able to see them, and then she collapsed unconscious.

Gianelli took Scarlett and her kittens to a veterinary clinic in Port Washington, New York where they were treated. One of the kittens, a white-coated, died of a virus a month after they were rescued from the fire. Scarlett needed three months of treatment and recovery.

This amazing story attracted international media attention. After the story appeared in the media the clinic received about 7000 adoption requests for Scarlett and for the kittens! The clinic chose to divide the kittens into two pairs and they found the perfect homes. Scarlett was adopted by Karen Wellen who decided to adopt her as she was special needed.

Scarlett spent 12 1/2 years with her loving family in Brooklyn. As a result of her burns, she required some ongoing care. Her eyes needed to be lubricated several times a day. She died on October 11, 2008 after she was diagnosed with a heart murmur.

The North Shore Animal League has created an award named the Scarlett Award for Animal Heroism, in Scarlett’s honor. This award is presented to animals that have engaged in heroic acts to benefit others, whether humans or other animals.

Scarlett’s story touched so many hearts! She have been described in a number of non-fiction books. She has also become a featured animal in the fund-raising and public relations efforts of the shelter that treated her and her kittens, the North Shore Animal League.

Please SHARE Scarlett’s amazing story! She should never be forgotten!