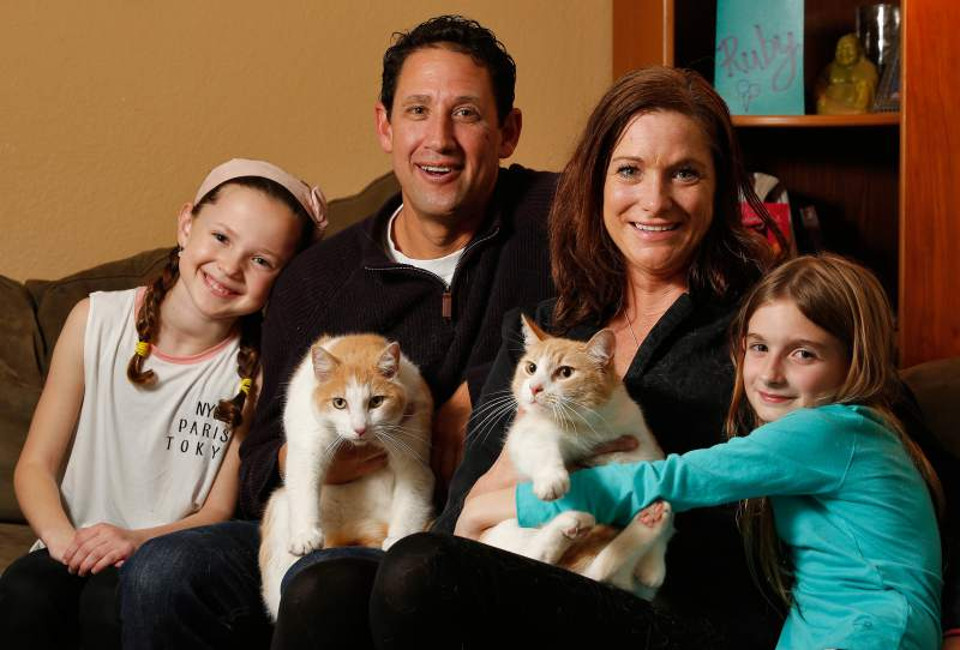 Ozzy and Butter were found together with their four other brothers at a mobile home park without their mom. The six kittens were taken at Petaluma Animal Services, a no-kill shelter in Petaluma, California.

All the six kittens went to foster cares, Butter and Ozzy being paired up together.

The first of the kittens who found a loving family was Ozzy. He was adopted by Cathleen Cavin and her daughter. They couldn’t adopt both kittens because they had rental restrictions, but they felt really sorry they had to sepparate the two little brothers.

One day they decided to look for Ozzy’s brother. They contacted the animal shelter but Butter was adopted four days after they adopted Ozzy.

Cavin connected with a man named Brian Herrera on a dating app and over a year later, the two decided to meet on a date. Neither of them had any idea what they were about to find out…

They talked for hours and, after dinner, continued their evening at Herrera’s house where, out of the corner of Cavin’s eye, she she saw an orange-and-white cat.

The next day, Herrera, went to Cavin’s house. He couldn’t believe the similarities, either.

They compared adoption paperwork, and sure enough, Ozzie and Butter were brothers!

“This is the twin brother I told my daughter I’d been searching for forever,” she said.

Cavin and Herrera have been dating ever since!

“We’re happy to say their new life is going very well; their mom and dad, Cathleen and Brian, are a lovely couple and they say things are great and they are living a dream. This world needs more love!” Petaluma Animal Services wrote on Facebook.