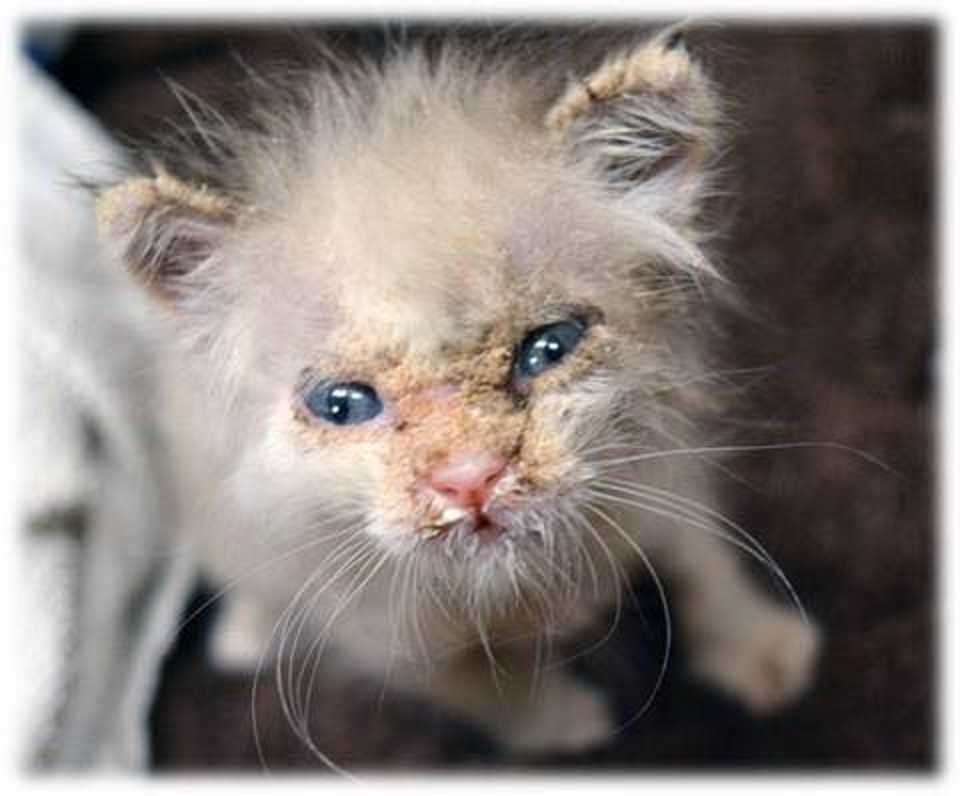 A tiny kitten was brought to a country shelter being covered in mange all over his face and body. Rescuers of Justin Bartlett Animal Rescue took the poor kitty in their care and offered him the medical treatments that he needed. Underneath all the crusty scabies was hiding an amazing cream colored kitten. The beautiful kitten, named Jorah was placed in a foster home and his rescuers started his medical treatments immediately.

“Little cute and crusty Jorah got his revolution, for his skin and a medicated bath tonight. And his foster momma made him a sock sweater, which he hates, so he wouldn’t be able to itch and scratch himself! On top of that, this poor boy also has to be on antibiotics for a cold.” his rescuers wrote on Facebook.

“This poor boy also has to be on antibiotics for a cold. Ok a good note, Jorah eats like a piggy and today he did a poop, all by himself. Sometimes it’s the little things!” his rescuers wrote on Facebook.

“Jorah is so flipping cute, we can’t even take it! How adorable is he in his homemade sock sweater anyway?! He’s so itchy from his crusty scabies, but the sock is doing the trick!”

After a few days… “He received another nice bath and a new sock sweater! A lot of his mange crusts are falling off and he is starting to feel more comfortable. Thanks to his foster mom to taking such good care of him!” his rescuers wrote on Facebook.

With a lot of love and care baby Jorah is becoming more and more handsome each day!

“Baby Jorah is a perfect example why so many of our fosters aren’t scared to take on mange cases…. they know the beautiful being underneath all that crust, is so worth it… and Baby Jorah was definitely worth it! He is stunning!!”