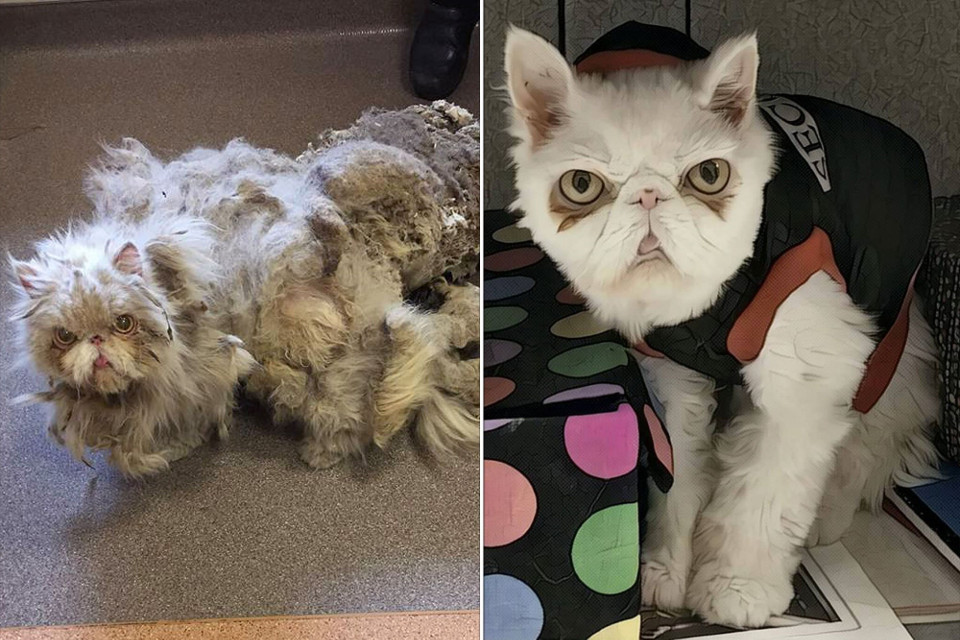 Sinbad, a nine year old Persian cat was found covered in five pounds of matted fur that looked like he was dragging a carpet.

An utility worker noticed him in the home of an elderly gentleman. The man wasn’t able to care for himself very well and Sinbad needed help! He could barely move trapped in his own mats and he was very weak.

When Sinbad arrived to The Anti-Cruelty Society (in Chicago), the shelter staff was shocked by the amount of matted fur accumulated on the him. The staff shaved him down and they discovered a tiny, adorable cat hiding underneath years of mats. It took them hours to shave his fur off. He was carrying more than half his weight in mats.

They had to force feed him for a bit as he didn’t have appetite but within a week, Sinbad bounced back.

Elliott Serrano, a humane education manager for Illinois’ Anti-Cruelty Society, whose humane investigation team rescued the horrifically matted cat from the basement, decided to take Sinbad home with him and foster him until he will find a forever loving family.

“It was the second day he was home with me. I was lying on my bed with Sinbad on my chest. He was just purring and chirping as I petted him. He looked at me with those big, round eyes, all content and happy with where he was,” says Serrano. “That was when I said to myself ‘aw heck, I can’t let him go.’”

After the heavy fur was removed, Sinbad’s back legs were atrophied and he was having a hard time walking around without falling, but within a few days he built up the muscles in his legs enough to jump up on furniture.

“He has recovered very well and for a cat of nine years, after going through what he has, is very friendly and frisky.” Despite Sinbad’s experience was not easy for him, he continues to love and trust humans.