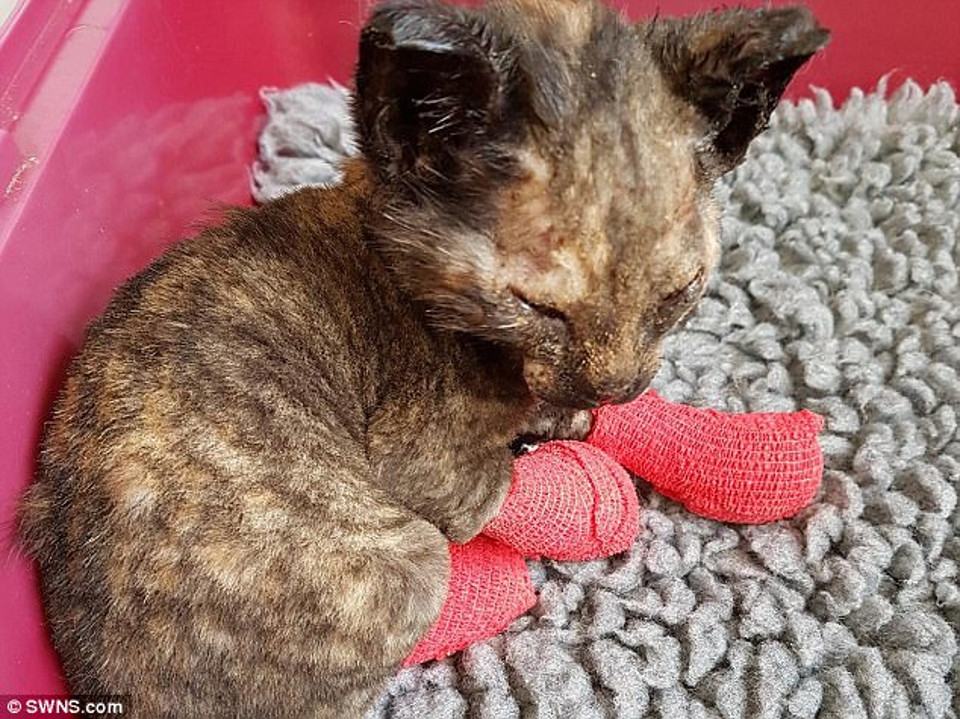 A 14-weeks-old kitten, named Phoenix, suffered horrific burns during a garden fire in Sunderland, UK. Her mum and brothers ran to safety but Phoenix became stuck between two pieces of wood underneath the shed.

The woman who was living there contacted the fire service after noticing the blaze and it was soon extinguished by firefighters. But she didn’t know a little kitten was trapped beneath the burnt out shed until she heard a ‘meow’ coming from the garden. She run to the kitten and she noticed her small paw sticking out of the rubble. She immediately called the RSPCA and asked for help.

Poor kitty was left severely burnt after being rescued. She lost her tail as well as fur from her ears, paws and toes during the fire. She was so badly hurt that she had to wear mittens on her paws and couldn’t close her eyes properly. She was cared at RSPCA Felledge in County Durham where she needed round-the-clock attention. She is lucky to be alive after such a terrifying experience.

After two months of devoted care, the fur on Phoenix’s body and the pads on the bottom of her feet have grown back.

She has been fostered by the centre’s reception supervisor Luka Atkinson. ‘She runs riots with the other kittens at our centre so we are just so happy we gave her a chance and saved her life.’ Luka said.

‘She is such a happy little thing and she eats, plays and loves fuss just like any other kitten, we hope people won’t be scared by her appearance while she heals.

‘She runs riots with the other kittens at our centre so we are just so happy to give her a chance and saved her life – she really is the luckiest kitten in Britain.’ she said.

And indeed Phoenix is the luckiest kitten in Britain as she didn’t have to wait too long and she found her forever loving home!