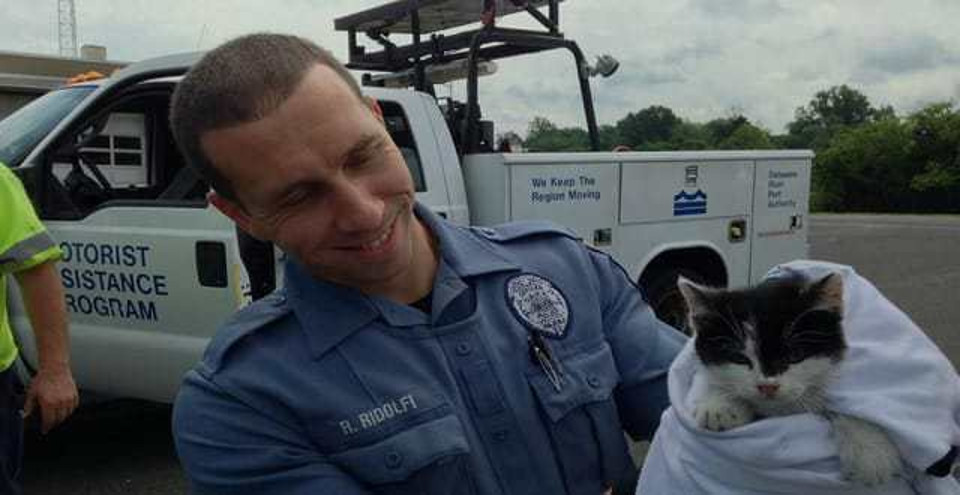 Someone tossed a kitten from the window of a moving car on the Walt Whitman Bridge.

Jean Finizio was on her way to New Jersey when she saw the kitten running in the median of the bridge. She pulled over the car to try to make the kitten to jump into her car. After she pulled over on the bridge trying to avoid hitting the kitten, the scared kitten jumped into her tire well.

Delaware River Port Authority Officer Richie Ridolfi happened to be crossing the bridge headed toward Philadelphia at the same time when a call was made about a kitten being tossed from a car window.

“I’m the biggest animal lover,” “As soon as I get a call about any animal on the bridge, I’m the first person to get there.”

“I laid on the ground, in the middle of the bridge, under the car trying to reach for the cat, but she must have gotten scared and she ended up crawling into the undercarriage,” Ridolfi said.

Traffic began to build, so they decided to move the car to the end of the bridge to try to catch the kitten. They reached a parking lot and they managed to rescue the kitten from the car’s undercarriage.

The kitten was taken to Philadelphia Animal Hospital and now she is already adopted! Her name is Bridgette and she is happy at her new home. The person responsible for throwing the kitten from the car was not tracked down by the police.

“I took her to Philadelphia Animal Hospital to make sure she was not injured or sick, and I took a few photos to post on Facebook to see if anyone was interested in adopting the her,” said Ridolfi, who offered to pay for all of the vet treatments in return for a good family for the kitten.