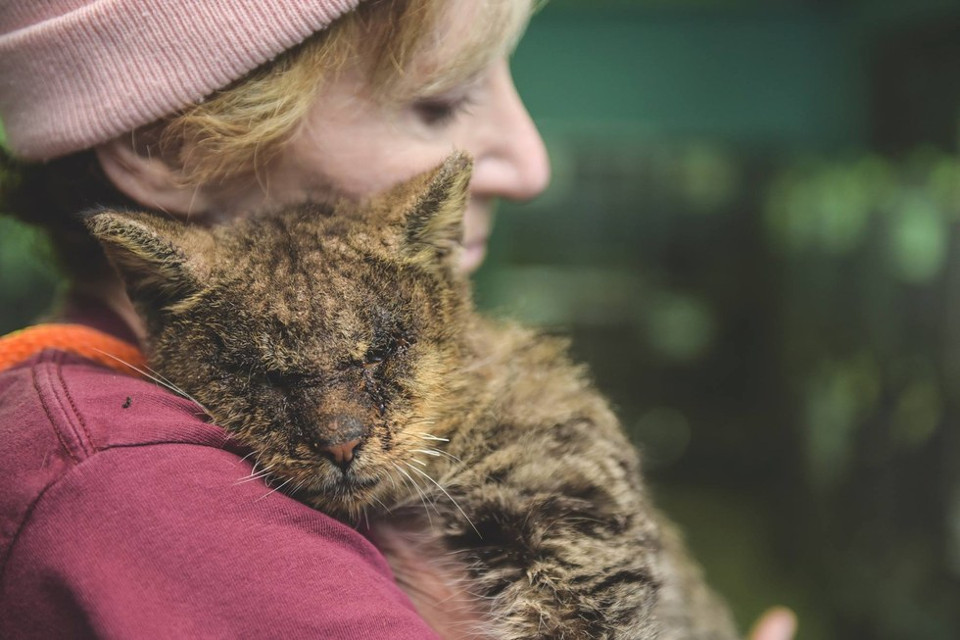 Valentino was in an extremely bad shape when he was rescued. His fur was hardened with dirt, he had severe sarcoptic mange, and his eyes were so caked and swollen that they were sealed shut. People refused to touch him.

Because of his appearance, no one wanted to even touch him. A woman named Elaine Seamans noticed him while passing by his cage at the Baldwin Park animal shelter.

While she was walking by his cage, she heard a faint cry. She turned and saw Valentino reaching out of his cage with his little paw like he was asking for her to help him.

“There are times when it’s not an option to keep walking,” Seamans told The Dodo. “You just have to stop. This was one of those times.”

The kind hearted lady didn’t care that Valentino wasn’t in a good condition. She didn’t care about his appearance at all. He was a cat who needed her. She knew he needed her help so she grabbed him right out of that cage and held him close to her chest. He put his head on her shoulder, and in that moment, Seamans knew she can’t leave him there.

She picked up Valentino up and took him immediately to a veterinary clinic. He couldn’t move, he couldn’t see but he just felt that the lady can help him. He just felt the love and he knew he was safe and that he could trusted her.

Thankfully, Valentino’s issues were easy to be treated. With a lot of love and care he was nursed back to health. He is now in good health and has many years ahead of him. He found a loving family who decided to offer him the great life that he deserves! He is now enjoying his life to the fullest!