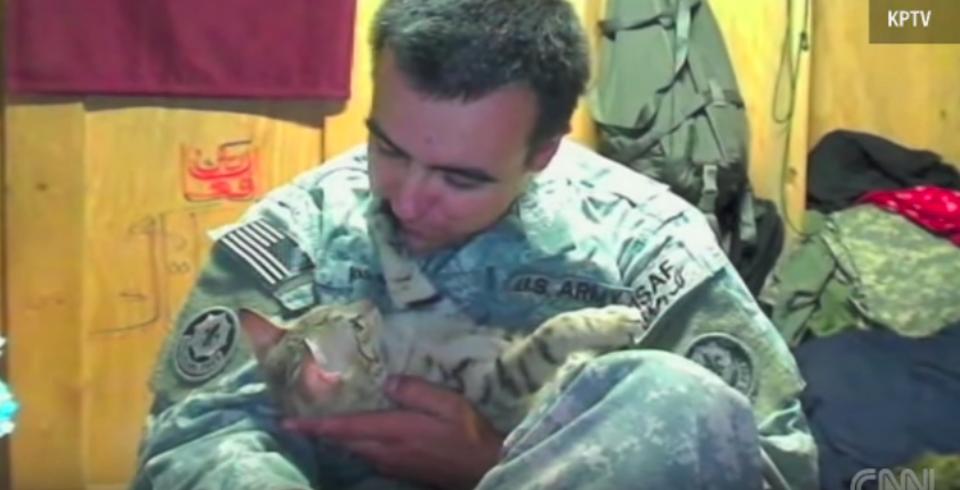 Sgt. Jesse Knott has served in the military for eight years. During that time he needed a little bit of light into his life so he rescued a cat decided to take her into his office, despite he was not actually being allowed to keep a pet there.

The cat, named Kashka, was able to offer Knott the comfort that he needed so much when he found out that two of his friends had been killed when a suicide bomber had targeted their convoy. When Kashka sensed his human friend’s sadness, curled up with him and comforted him as he grieved.

Kashka was the one who gave Knott hope the moment he lost it. The two got very attached one with another so Knott decided to get Kashka out of Afghanistan and take him to safety at his home in America. A kind hearted local interpreter wanted to help Kashka and made the very brave decision to take Kashka and personally bring him to Kabul. It was with great risk that this interpreter traveled with Kashka. After weeks of anticipation, Knott received the news that they had made it safely to Kabul!

Once in Kabul, Knott’s parents had to bring Kashka home. Three thousand dollars and a couple of flights later, the rescued kitty arrived safely to Knott’s home in Portland. Knott and his family were so happy offer Kashka a safe forever home that she deserved!