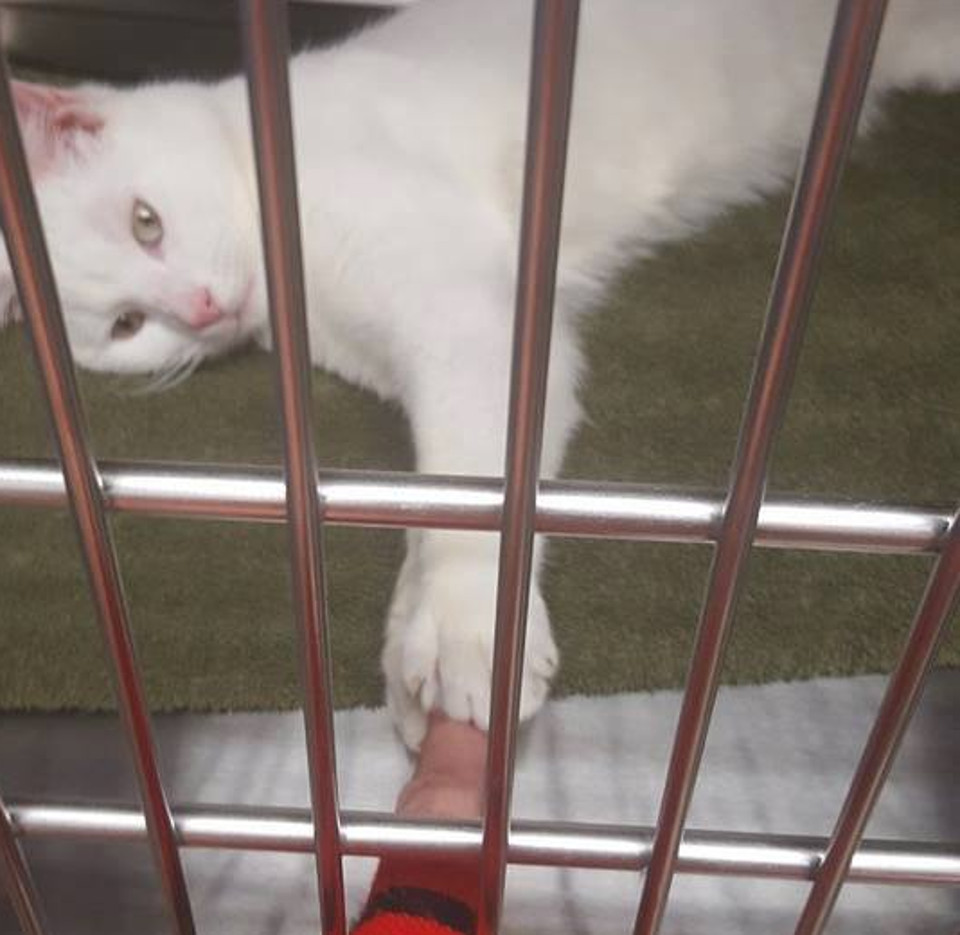 Community cats may not be a name recognized by all. Community cats are known as ferals, outside or unowned cats. But it is important to understand how these cats came to be – mostly through abandonment. People tired of having a cat as a pet, are moving, and so on, and the cat becomes dispensable. The cat is then abandoned or left behind, without any way to eat, drink or care for itself without getting another chance.

These abandoned cats will form colonies where they live with other cats who have found the same fate. Trap-neuter-vaccinate-return (TNVR) programs work to spay/neuter and vaccinate to prevent further reproduction and create a much healthier situation for both cats and people.

Here is the story of one such cat that was living in a colony who got a second chance. He was rescued by Ika Baaklini in New Jersey.

“I got a call from a feeder of a feral colony on Nov 9, 2015. A young cat is lying lifeless in a shelter. I had her bring him to me. He was in bad shape, barely breathing. I called a friend that works at a veterinarian’s office and together we gave him sub-fluids. After learning how to do it, I continued to do it through the night. I also continued checking to make sure he was breathing.” Ika of Community Cats United told Land Of Cats.

In the morning, Ika took him to the vet. He had a very high fever and was not alert. He was given an antibiotic shot and a steroid shot. “I was told to take him home and feed him with a syringe. At this point, he was curled up in a ball and not moving much. I took him home and followed the vet’s instructions. We had to return to the vet a week later for an enema and antibiotics.” Ika told Land Of Cats.

An online fundraiser was set up to help with the vet bills. They raised $1,000 after posting it on Trap-Neuter-Return Community Facebook page. This would also allow for more testing. Ika believed with all her heart that he would return to the normal cat he had been.

“I decided to name him Aspen, as he is all white. He was showing me each day his will to live, lifting his head and purring for me. The first night that I did the fluids, I put my finger in his paw and he wrapped it around my finger. I promised him I would not give up.

As days and weeks passed, Aspen was regaining more strength. He could not use the litter box as it was difficult for him to stand. I learned how to do passive range of motion for all his legs and water therapy every single day. We returned to the vet and had full blood work done – nothing showed. The thinking was that he had suffered head trauma.” Ika told.

Aspen took strong antibiotics for 20 days. He started to show real improvement and after five weeks, he started walking again with wobbly feet and his head tilted. His movements were jerky but he started using the litter box. Ika trained him to be put in the litter box at exact times, as he was too wobbly to do it on his own.

“On Christmas Eve, I found him under the Christmas tree and not in his bed. It was the first time he had moved on his own. I knew he would get better but I also worried about his quality of life.”

“At his next vet visit, we found out he was deaf. After six weeks with me, Aspen started walking slowing but alone. He also began using the litter box on his own. He was getting stronger each day. On January 7, 2016, he was neutered.”

“Today he is doing amazingly and we have a very strong and special bond. He follows me around the house. He is making friends with my other cats and playing. He uses the litter box himself. He is a gentle and affectionate cat.

I also returned and am working on TNVRing Aspen’s colony of 25 cats. We have spayed/neutered 19 and will finish up in the spring.” Ika told Land Of Cats.

In the video below you can watch Aspen’s evolution, then and now!

Community cats, like Aspen, are living, breathing, and feeling creatures. They do not deserve the disdain that is directed at them. To learn more about community cats and TNVR, please join Trap-Neuter-Return Community on Facebook.