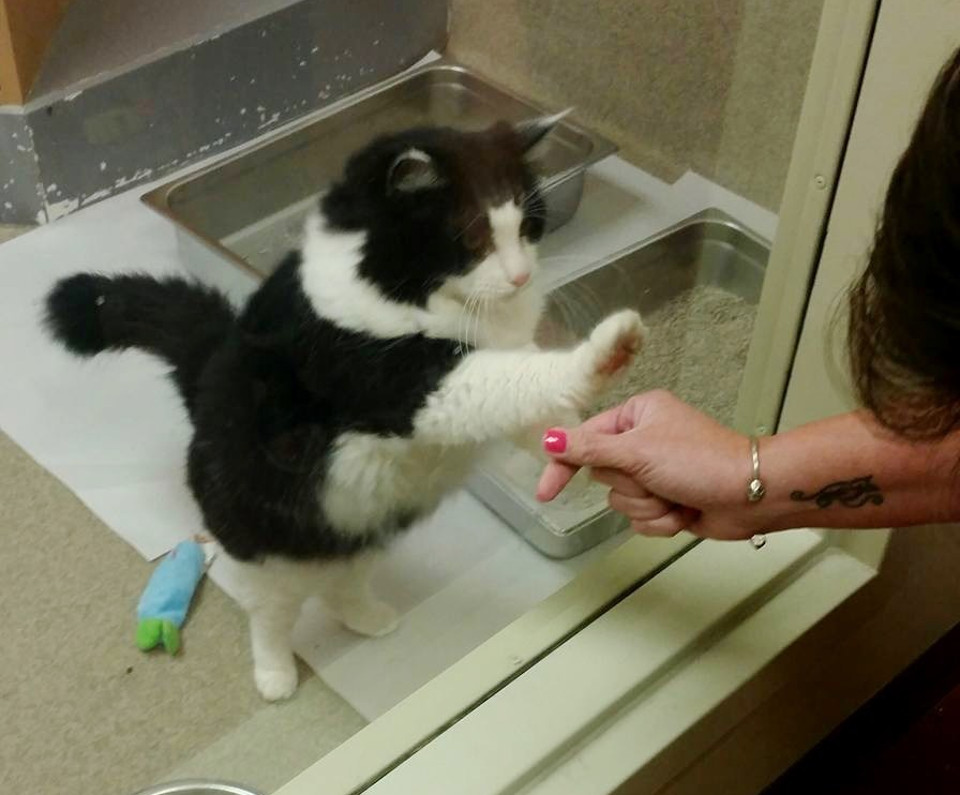 At 13 years old, SIENNA was living the shelter life. She was taken at the Tabby’s Place, a cat sanctuary in Ringoes, New Jersey after her human passed away. Sienna missed having someone to love her and she would run up to anyone who would pay attention to her. She was pawing desperately at her window hoping to get a human to adopt her.

Sienna became an Internet sensation as every time she was spotting a visitor, she was waving her paws up and down the window, asking to be noticed.

“Once upon a time..there was beautiful long hair black & white cat named Sienna. Sienna became an Internet sensation when a video of her pawing her suite window as humans passed by was shared.” Siena’s rescuers wrote on Facebook.

One day, when she was doing her famous ‘dance’, a kind hearted human really noticed her! That was the last time she danced at the Tabby’s Place. She moved into her forever home. Her name is now Chloe, and became the queen of the house.

“Today the fairytale had a happy ending..Sienna was adopted, and is heading to her loving and forever home. We send our love to Sienna, Tabby’s Place alumna and her family.” Tabby’s Place wrote.

Nothing makes Chloe happier than having a loving human who offers her all the love that she needs. She also has a new sister, Ella, who was also rescued at 13!

It’s been more than two years since Chloe was adopted. “Today Chloe and I met 2 years ago at Tabby’s Place where she had made her internet debut as ‘Sienna the dancing kitty’. She came home that day… And two lives improved. Love my sweet girl so much, and I am honored to have her in my life.” how mom wrote on Facebook.