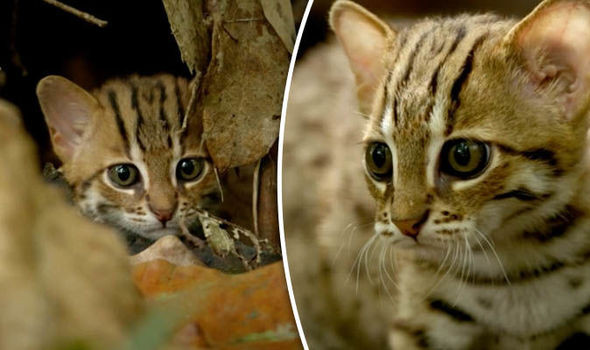 The rusty-spotted cat is one of the feline family’s smallest members, of which historical records are known only from India and Sri Lanka.

The rusty-spotted cat (Prionailurus rubiginosus) is the smallest wild cat in Asia. It rivals the black-footed cat as the world’s smallest wild cat. It measures 35 to 48 cm (14 to 19 in) in length, with a 15 to 30 cm (5.9 to 11.8 in) tail, and weighs only 0.9 to 1.6 kg (2.0 to 3.5 lb). The short fur is grey over most of the body, with rusty spots over the back and flanks, while the underbelly is white with large dark spots. The darker colored tail is thick and about half the length of the body, and the spots are less distinct. There are six dark streaks on each side of the head, extending over the cheeks and forehead.

These wild cats are found mainly in moist and dry deciduous forests as well as scrub and grassland, but is likely absent from evergreen forest. They prefer dense vegetation and rocky areas.

Weighing just over 1 kg this cat is 200 times lighter then a lion. One rusty-spotted cat is so small that it can sit in the palm of the hand and weighs little more than a bag of sugar. Rusty spotted cats are super rare! Their eyes are six times more powerful then ours helping them to find prey in the undergrowth.

The BBC’s crew teamed up with conservationists in Sri Lanka to find a young male on the point of going it alone in the world for the first time at a remote rainforest sanctuary.

“Rusty-spotted cats are a beautiful, yet elusive mammal.”

“As the smallest of the cat family, rusty-spotted cats are quick and unbelievably nimble; two factors that make them very hard to capture on film.”

“Coupled with intermittent monsoon deluges, the deep shade of the rainforest canopy and lots of leeches, it made for a very interesting shoot.” he said.