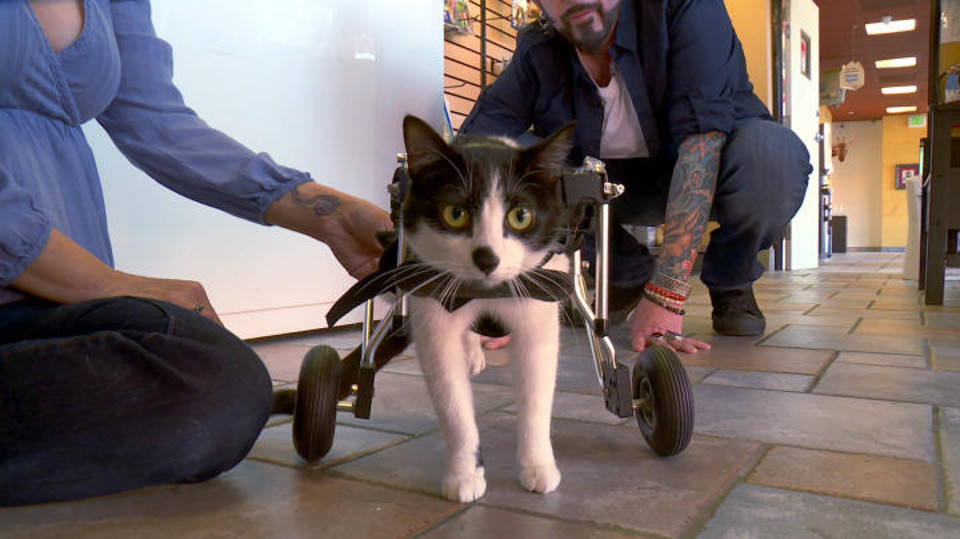 When a cat is experiencing paralyzation, it is often because communications between the spinal cord and the brain have been disrupted. In some cases, the cat will not be able to move its legs at all, and in other cases, there may still be some communication between the brain and spine and the cat will only appear to be weak, or will have difficulty moving its legs, a condition called paresis or partial paralysis.

Ziggy was rescued after she was tossed from a moving car when she was only a 6 weeks old kitten. After this bad episode she remained paralyzed from the waist down.

Ziggy was taken in the care of Milo’s Sanctuary and Special Needs Cat Rescue, a southern California-based non-profit specializing in rescuing cats with physical challenges such as blindness, missing limbs, paralysis, and their medical conditions. She went into their Lifetime Care Program designed for cats who can’t be re-homed due to medical or other issues. Ziggy needed two surgeries and she went through a bad virus but she was a fighter and she didn’t give up.

Milo’s Sanctuary President and Co-Founder Michele Hoffman said that Ziggy has taught her so many things and gave her some important life lessons! Ziggy has taught her to never give up, to fight all odds and to keep going through the toughest times and she is inspired every day by her strength and her ability to overcome everything that she has been through. Being unable to move like a normal cat, Ziggy was sometimes grumpy, she had those moments when she become difficult.

Jackson Galaxy made Ziggy a visit and offered her a wonderful gift! It’s something that she needed so much! You have to watch this touching video posted by “Animal Planet” YouTube channel!

Please SHARE this inspiring story with your friends and family!