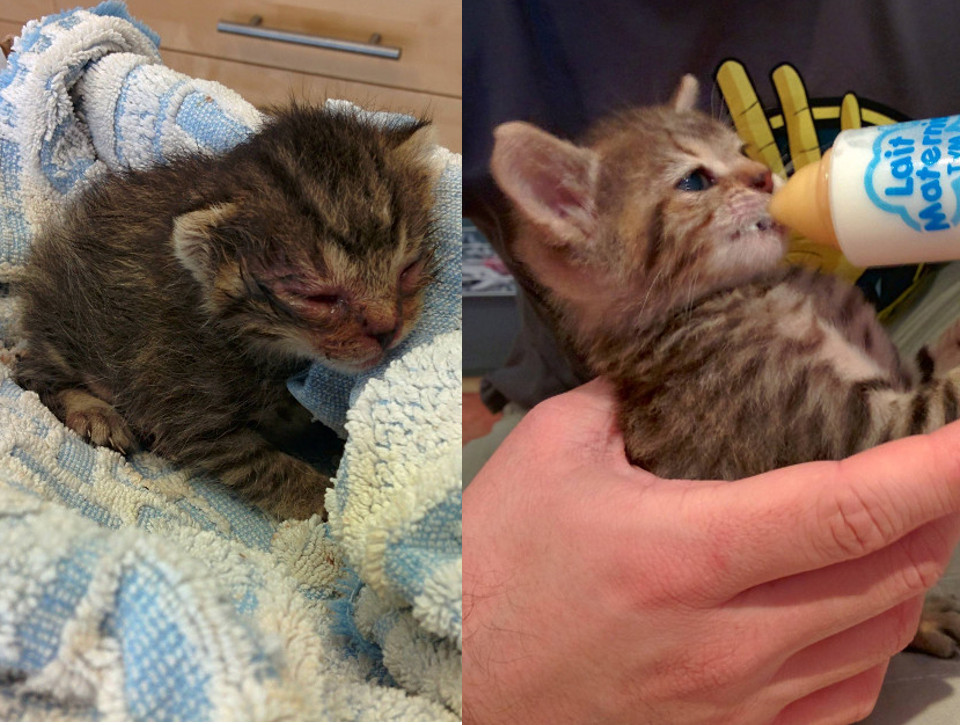 Penny the cat was found lying helpless on the ground near a family’s house. They waited to see if her mom would come back but nothing… Poor kitty was abandoned.

“Here’s Penny, a cat (supposed her mother) had put her on the ground near the house, we waited to see if she came back but nothing… Penny was abandoned.” the kitten’s rescuers wrote on Imgur.

The tiny kitten wasn’t in a good shape at all. The kind hearted humans who found her took her inside, they cleaned her as she was really critical. Her mouth was full of blood and gravel, her eyes were shut and also full of blood. It was Sunday, they couldn’t find an opened veterinary so they tried to help her until next day.

“We were worried, first time we found a cat like that, no stuff and veterinary closed as I said. We tried to kept her warm and hydrated with a little syringe of water (without needle of course)” the cat’s rescuers wrote on Imgur.

The next day they rushed with the kitty at the vet. The vet said she was in a very bad state and only 1 week old. They started to bottle-feed her. After some days of cleaning and feeding… Penny opened her eyes.

‘The right side of her mouth was crushed. Veterinary thought she was hit by something somebody.’ Penny’s rescuers wrote. With a lot of love and care Penny started to grow and gain more and more strength.

The family who rescued her decided to adopt her.

Penny with her best friend.

After 8 months… “Penny is now a chubby kitty! She’s full of energy, always playing and always looking for cuddle. She has that particularity of always smile with her little malformation, but she’s beautiful.” they wrote. Isn’t she beautiful?