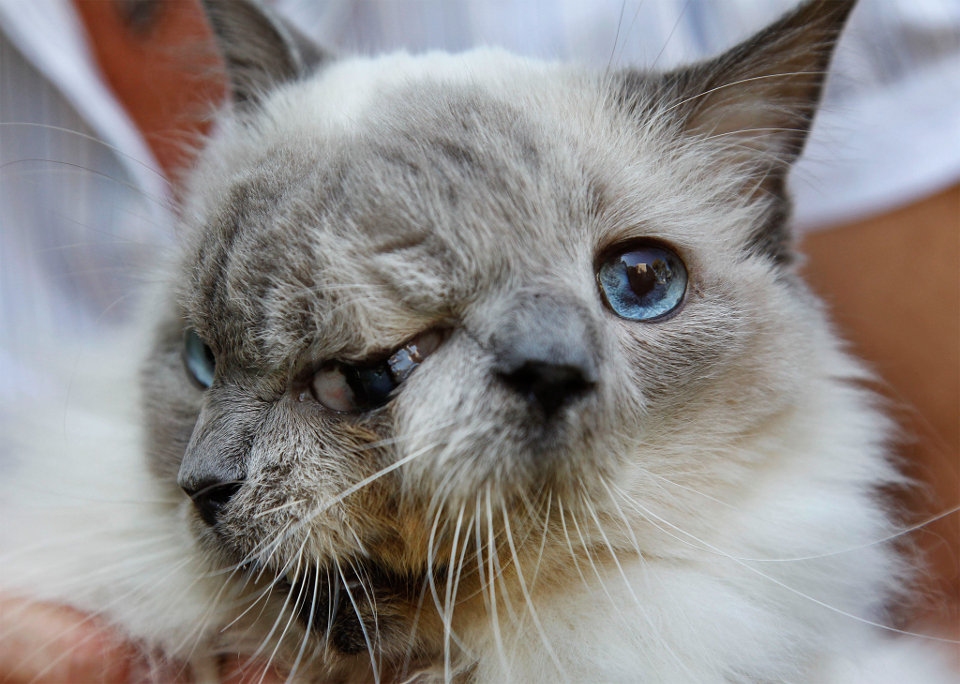 Frank and Louie, the well-known two-faced kitty that lived in Massachusetts was born in September 1999.

A breeder brought Frank and Louie to the Cummings School of Veterinary Medicine at Tufts University as the kitten was born with two faces, having a condition that is called diprosopus (also known as “janus” or “two-faced”).

The kitten was initially not expected to live more than a few days, as animals with this condition usually die within that time frame. Veterinary nurse Martha “Marty” Stevens took the kitten home to care for him anyway and ended up tube feeding him for 3 months. Frank and Louie eventually learned to eat on his own and “thrived”.

The cat was born with one brain, but had two faces, two mouths, two noses and three blue eyes. He had only one functional mouth, however, with the other being born without a bottom jaw. He had one esophagus, connected to the mouth with both jaws. His middle eye was non-functional and did not blink, which made “Frank and Louie appear to be staring even when his other eyes are closed”.

In 2012, the Guinness Book of World Records recognized Frank and Louie as the world’s oldest living janus cat. This was an uncommon distinction due to the fact most janus cats die within days.

His mom described him as “very, very laid-back, not afraid of people, very friendly and he’s actually more of a dog than a cat. He walks on a leash, he goes right in the car; he loves car rides”.

In November of 2014, Frank and Louie’s health declined. He made an an aggressive form of cancer. He passed away at the age of 15.

Most animals that have this birth abnormality don’t live that long but Frank and Louie defied the odds and lived a long and happy life!